It’s finally fall! My favorite time of year. It’s when the weather gets chillier, the nights get longer, and you can sit by the fireplace with your Fall Harvest Candle making the room smell like comfort and joy. Wait, that’s Christmas. Well, we’re not far from that either! 😀

My favorite thing about fall is the changing seasons. The wind picks up, the leaves turn yellow, the rain starts falling, we get to wear long sleeves again. Being here in California, there’s not too much of that – which is a HUGE change from Germany, where I used to hate fall, but now just miss it even more so. Moving to my new apartment came at the perfect time. I moved from the beach (where the only green was on palm trees) so suburbia (where trees were planted on purpose, but are nonetheless there). I moved to an apartment community that pays particular attention to green landscaping, which I absolutely adore. So just in time for fall, I have all those trees around me and they’re currently turning yellow right in front of my living room window.

Right now, it’s not just leaves turning yellow, but we also have quite some wind blowing from the Santa Anas. It’s warm wind, but it’s wind! And it’s been blowing all the pretty leaves down – and quite some branches and fruits. Fruits? I don’t know, I think they look like chestnuts in their shells, but that’s not what it is. I honestly have no idea what the wind blew off of those beautiful trees right in front of my house, but they look pretty and they look like fall! 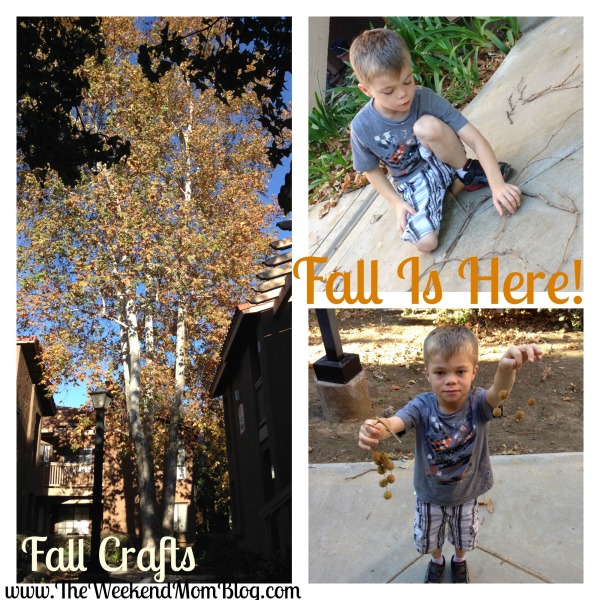 As Christopher and I came home from dance practice today, he had a blast playing with the leaves and all the sticks that were sitting around. So we stayed outside and enjoyed fall. And then I had an idea:

Why don’t we bring fall inside?

#1: Make it a nature adventure while collecting pretty fall items.

So we started collecting those “fruits” to make decorations with them. Christopher was very excited. He loves nature and he does not get enough of it out here. To our advantage, some of those spiky balls had already been sitting on the ground for a little bit and were brown. Others, the wind had forced down and they were still perfectly green. And then there was a second, less spiky kind, which was sort of a yellow. We collected a whole bunch of every sort into a bag.

After we were all done collecting (and running across a real life praying mantis), we went up to our porch to create layer art. What else would you do with the same thing in three different colors? I got a simple vase and we started layering our spiky balls. 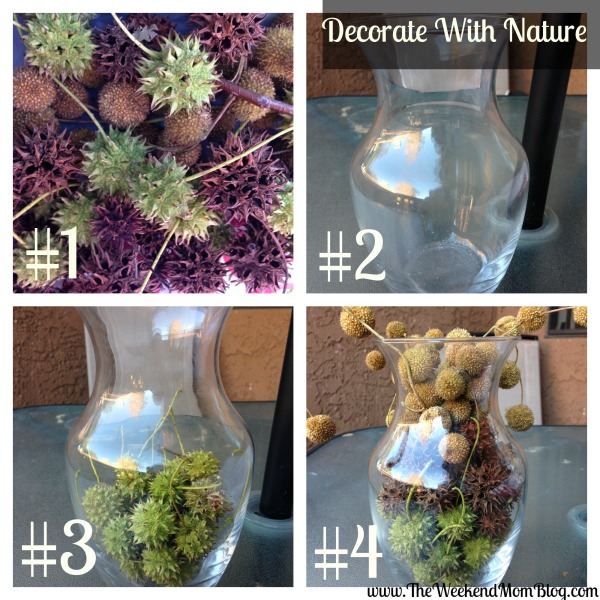 #3: Add something slightly different to make your art pop.

In the end, I stuck in those that were still attached to their branches to make the vase pop out a bit more. I was considering adding a candle, but the inflexibility of our chosen natural material didn’t allow for safe candle handling. Candles would be a good idea when choosing a form of sand, small vegetable or the like. In my case, I decided to use the same natural material in a slightly different form. After all, this IS a vase, right? Things are supposed to stick out of it.

#4: Find a good place to show off your piece of art.

Then I took the vase and put it up on the mantle over the fireplace. It could also be a centerpiece, but I don’t have a table yet. Isn’t our art beautiful? The best part: 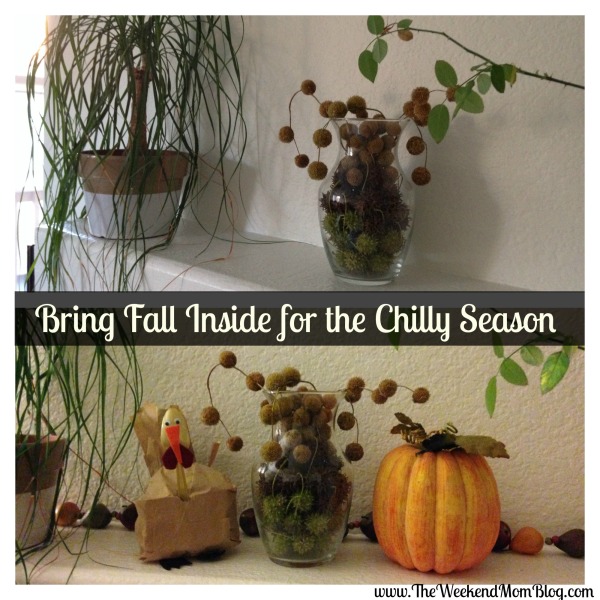 #5: It was completely free AND we got to enjoy fall outside.